Already Pasteur remarked that “la vie empêche la vie” but it was not until Fleming observed the chemical war between microorganisms that this resulted in the first potent antibiotic, penicillin.

Ultupharma has the goal to identify antibiotics with new mechanisms of action using microorganisms as sources to new metabolites. New microorganisms and new methods of cultivation developed in collaboration with a research group at SLU, have been found to produce new metabolites with anti-bacterial and anti-fungal effects. Initial screening for effect against bacteria resistant to present antibiotics and methods to rapidly determine chemical structures, novelty and patentability have been developed. More than 2000 microorganisms have so far been studied and about 500 new are added annually. This allows many thousand fractions to be tested annually and several interesting new compounds have already been identified with activities against bacteria and fungi causing disease in humans and animals.

A novel method for isolation of bacteria producing antibacterial peptides was recently published in Frontiers in Microbiology: Selective isolation of multidrug-resistant Pedobacter spp., producers of novel antibacterial peptides. This method resulted in the peptides of the ULT3-programme (ACS Chemical Biology: Isopedopeptins A–H: Cationic Cyclic Lipodepsipeptides from Pedobacter cryoconitis UP508 Targeting WHO Top-Priority Carbapenem-Resistant Bacteria). In the future, this approach is expected to continuously yield many additional new antibiotic compounds for evaluation as putative new antibiotic drugs. 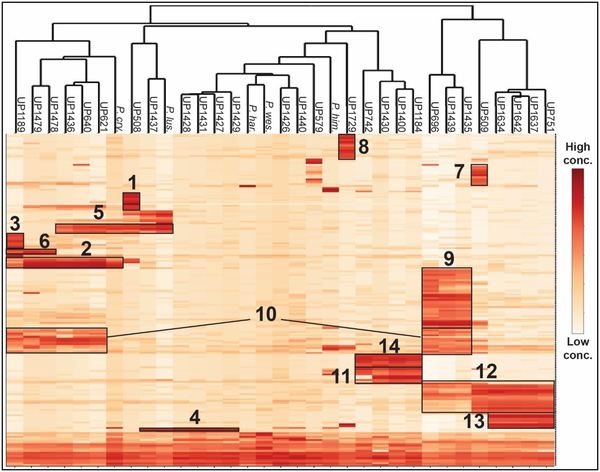 The ULT1-programme is also based on compounds produced by microorganisms, as described in Antibacterial 3,6-disubstituted 4-hydroxy-5,6-dihydro-2H-pyran-2-ones from Serratia plymuthica MF371-2, published in the Journal of Natural Products. The ULT1-compounds include two compounds isolated from the soil bacterium Serratia plymuthica, as well as a large number of synthetic analogoues. The ULT1-compounds have potent against Gram-positive bacteria, including MRSA.

2) Repurposing nucleoside analogues in combination with other known compounds

Repurposing nucleoside analogues, in combination with uridine and an inhibitor of bacterial dihydrofolate reductase, is the basis for the ULT2-programme.

The antibacterial profiles of the ULT2 combinations include broad activities against both Gram-negative and Gram-positive bacterial pathogens, thereby including many indications. The ULT2 programme has two additional key advantages; short time to market and low developmental risks. Several ULT2 combinations could be developed based on which indication(s) and bacteria(s) are targeted.

The mode of action is likely to involve several targets, including direct inhibition of the bacterial DNA polymerization (1) and lowering the pool of thymidine available for DNA synthesis via three different mechanisms (2-4). The uridine component increases the effect of the other two components. In addition, it also decreases toxicity of the nucleoside analogues and has an anti-inflammatory effect. This could be important in many infections where an anti-inflammatory effect can be beneficial. This includes sepsis, urinary tract infections, Helicobacter pylori infections and several pulmonary infections. Uridine supplementation has been shown to have an anti-inflammatory and anti-fibrotic effect in an animal model of pulmonary fibrosis, and to improve intestinal barrier integrity and reduce incidence of diarrhea in piglets.