The ULT1, ULT2 and ULT3-programmes 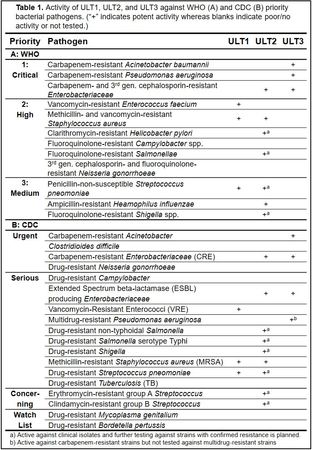 ULT1, ULT2 and ULT3 are Ultupharma’s current antibiotics programmes. Antibiotics in these programmes have activity against a wide range of bacterial pathogens in the WHO and CDC priority lists (Table 1, click table to enlarge), including carbapenem resistant Acinetobacter baumannii, Pseudomonas aeruginosa and Enterobacteriaceae. The ULT3 peptides have also activity against colistin resistant Escherichia coli, A. baumannii and Klebsiella pneumoniae

The ULT1-programme is based on new antibacterial compounds discovered in cultures of Gram-negative soil bacteria, which have shown potent effect against Staphylococcus aureus strains MRSA, MRSE, MSSE, MSSA and VRE and strains resistant to mupirocin, vancomycin, etc. (Bjerketorp et al, J. Nat. Prod., 2017, 80, 2997-3002). Patents have been granted in Sweden (SE539512) and in the US (US10471043 and US10933048). Several active analogues have been synthesized and more are planned.

ULT2 treatments give potent antibacterial effects in mice with peritonitis/sepsis and urinary tract  E. coli infections, with no toxicity and at doses expected to be safe in humans. Further development is ongoing with the aim to reach clinical studies, targeting both Gram-negative and Gram-positive bacterial infections not responding to treatment with present antibiotics on the market. Patents have been granted in Sweden (SE540411), the US (US10828316 and US10828317), Japan (JP6895435), Europe (EP/NL/IE/GB/FR/DE/CH/BE3407898), Hong Kong (HK40046560A) and China (CN201780004884.X). National applications have been filed in Australia and Canada (PCT/SE2017/050071).

The ongoing analysis of metabolites from microorganisms is efficiently resulting in a rapidly growing number of new compounds with promising antibiotic properties. New ways to isolate bacteria producing novel antibiotic compounds have also been developed by Ultupharma in collaboration with the research group at SLU, as described in the recent key-publication in Frontiers in Microbiology: Selective isolation of multidrug-resistant Pedobacter spp., producers of novel antibacterial peptides. One result from these developments is the ULT3-programme, which is a series of bacterial peptides with potent activity against Gram-negative bacteria, including carbapenem-resistant E. coli, A. baumannii and P. aeruginosa, and colistin resistant E. coli, A. baumannii and K. pneumoniae, along with acceptable toxicity and haemolysis properties. These antibiotic peptides are described in a recent publication in ACS Chemical Biology: Isopedopeptins A–H: Cationic Cyclic Lipodepsipeptides from Pedobacter cryoconitis UP508 Targeting WHO Top-Priority Carbapenem-Resistant Bacteria. A patent has been granted in Sweden (SE543054), and national applications have been filed in the US, South Africa, South Korea, Japan, Australia, Canada, China and Europe (PCT/SE2019/050789).